The black box of an aeroplane, also called flight recorder, is a device that saves and keeps the instrumental activity, the procedures and even the conversations held by the pilots during flight.

Basically, the black box’s function is to register any data which, in case of an accident, will shed light on its possible causes.

But would you like to know more about this mysterious appliance? In today’s post we tell you all about black boxes in aeroplanes: their origin, what colour they are, how many are carried by an aircraft and… Read on for loads more!

Origins of the black box

A bit of history…

As is usually the case with all major scientific and technological advances, there is no sole person responsible for the creation of aeroplane’s black boxes. Still, we can say that the first prototype was presented in 1939 by the French engineer François Hussenot.

It was a device that was made with cinematographic film calibrated with mirrors in which thrown flashes sent by the aeroplane’s sensors were registered.

And guess what happened? The whole world was immersed in World War I and that’s the reason why it is said that in June 1940, Hussenot buried his prototype black box in a beach to prevent the Germans from getting hold of it.

The early stages of the black box in aircraft, as we now know it, didn’t arrive until 1953. In this year, the chemist and aeronautical Australian engineer, David Warren, started the investigation of a series of accidents of the De Havilland Cornet, the first commercial reaction aeroplane.

In 1958, Warren had already designed the first prototype of a “flight memory unit” which, in the beginning, was rejected by the aviation authority who did not think it was useful. Also, pilots considered it to be an intrusion to their work and claimed it was a spying system.

Finally, half way through the 60s, it was established that voice and flight recorders would be compulsory equipment for all aircraft weighing over 7000kg.

Dave Warren with the first prototype of black box.

Aeroplanes are not the only means of transport integrating black boxes amongst their essential devices; trains, ships and spacecraft also have recorders.

In fact, ships integrate similar devices to black boxes in aeroplanes, precisely deriving from these, which are called Voyage Data Recorders (VDR).

The CVR or Cabin Voice Recorder is the black box’s device that registers all the voices and sound warnings in the cabin. The whole of the top part of the cabin is equipped with various independent microphones to do so.

With the advent of technology, CVRs have become more and more modernised and magnetic bands are no longer used. All information is stored in flash memories instead. These allow information to be kept for much longer and they do not require the aeroplane’s electric supply.

Additionally, the most modern black boxes already incorporate video storage so they are even more valuable in recording the previous moments to an accident.

FDR is the device in black boxes where all parameters that can be registered in a commercial flight are recorded, i.e.: altitude, speed, course, warp, etc.

These devices usually record, approximately, the last 17 to 25 hours of operations and undergo exhaustive checks to ensure they are kept in an optimal condition.

Black boxes also possess an underwater beacon allowing their localisation at depths of over 5,000 metres.

What are black boxes made of?

Taking into account the importance and sensitivity of the stored datum in black boxes, they have to be made out of materials that will withstand extreme conditions:

The tests the black boxes undergo to ensure they’re valid are really exhaustive and include: 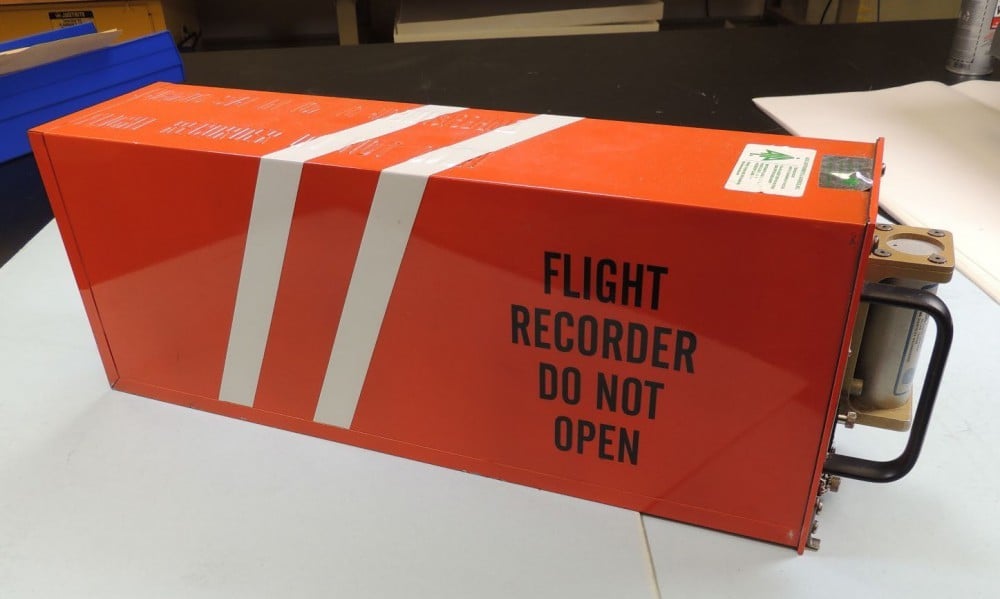 What colour is the black box of an aeroplane?

Paradoxically, black boxes in aeroplanes are actually orange. The reason for this is quite simple: it facilitates their localization if it were necessary.

And, if they’re orange, why are they called black boxes?

How the term was coined is a little diffuse. Some people believe it’s due to the first prototypes used by the RAF (Britain’s Royal Airforce) being black. Those first flight recorders, back in the 1940s, were black.

Other versions, however, opt for the theory of systems’ standpoint, in which the black box is an element receiving input and producing a series of responses. This is where the name ‘black box’ would’ve originated from.

Whichever the case, however, black boxes are covered in a glossy orange paint and are high temperature and corrosion resistant. They also have a label fixed to them with writing in lettering of at least 2.5cm stating: `FLIGHT RECORDER – DO NOT OPEN´.

What will black boxes be like in the future?

The main inconvenience facing black boxes is loss. This is why work on the implementation of GPS devices is being done; also, on the creation of floating black boxes, especially useful in high seas; or even on self-ejecting boxes.

In fact, self-ejecting black boxes started to be used in military aviation and, since 2015, are already implemented in some commercial aircraft.

A further problem to solve is the chance of total destruction of the black box. Satellite transmission of data in real time is being considered here.

This possibility initially seems rather attractive but is being carefully studied because if the data were to fall into the wrong hands of an individual or company, such sensitive information could be manipulated or used inappropriately.