Sarah Almagro Vallejo, Spanish champion in Prone 2 with the best wave and score in adapted surfing

Sarah has done it again! Last weekend, Sarah Almagro, together with all her team, became Spanish champions in adapted surfing.

In addition, Sarah has managed to make the best wave and get the best score of the whole championship. Undoubtedly, a great achievement that she has reached thanks to her strength, dedication and perseverance. Congratulations to the whole team!

On behalf of the whole Grupo One Air team, we want to congratulate Miguel Sampalo, for accompanying Sarah from the first wave until now. Also to Alberto De Mario who, with his enthusiasm, professionalism and motivation, has been a fundamental part of this adventure to make it possible.

And, of course, to Sarah; because dreams are there to be fulfilled. You are a fighter and you prove every day that, when you want it, you can do it. Let’s go all out, champion!

We couldn’t be prouder of Sarah’s results in her first participation in the adapted surf competition during the Abanca Pantín Classic Galicia Pro Surf, which took place last weekend. We were aware of her immense talent and strength and this competition confirmed it.

Not even three years have passed since her ‘rebirth’, Sarah Almagro Vallejo from Marbella, has accomplished one of her dreams by participating in the adapted Surf championship ‘Abanca Pantín Classic Galicia Pro’, which took place on 28 June. After the event, Sarah became the runner up obtaining second place in her category just behind the European champion, Nuno Vitorino, from Portugal.

The Abanca Pantín Classic Galicia Pro championships run every year in Valdoviño in Ferrol, and this was its second edition. It’s also one of the competitions which make up the Qualifying Series of the World Surf League (WSL), established in 1976 in Santa Mónica, California. Currently, the WSL is the world renowned surf organisation for excellence with more than 180 yearly scoring competitions to award the World Champion in its different categories.

In Spain, we see adapted surf is slowly becoming relevant thanks to the efforts of Alvin Bayona, an elite surfer who suffers with a spinal injury and organiser of the second edition of the Abanca Pantin Classic. In this edition Alvin has established the sport on a national and international level, also with the participation of international surfers such as Eva Aguirre, Marcos Tapia, Hugo Magruda, Marta Paço, Tomás Freitas, Lucas Borges, Nuno Vitorino, Álvaro Menéndez, Pierre-François Pochat, Maxime Cabanne, Mario Rivoiro, Ander Goenaga, and Jeff Munson, among others.

After the competition, and to make reference to a strong wave during the event, a triumphant Sarah said: ‘That wave marked a turning point, it made me realise all obstacles must be faced no matter how big they appear. Hearing how the commentator spoke about the wave I took gave me an energy shot and to later see the face and feel the hug of ‘MI PESCAO’ made me want more’.

This has been the first step toward her ‘star goal’ for Sarah Almagro in Paris 2024 Paralympics. From this, the ‘Pescaíto Team’ was formed made up of Miguel Sampalo-Bishop, principal trainer, and Alberto De Mario, second trainer with technical support who complete the team striving to reach that great day, and of course her debut in Galicia couldn’t have been better.

When Miguel is asked what he saw in Sarah, what made him decide to train her for the competition, he replies that it’s very clear to him: ‘High motivation, commitment, positivity, optimism, and perfection. A high capacity of focus and concentration. Mental strength, sporting intelligence and strategy.’

Alberto, the last trainer to join the team said: ‘I couldn’t believe it, I knew about Sarah through Miguel and social media. I knew it could be a great opportunity so I didn’t think twice in joining. It’s been one of the best decisions I’ve ever made. To be part of her sporting career, long may it last.’

At One Air, we totally agree with both trainers that Sarah is a force in surf, which is why we have supported her from the beginning and as us there are many other companies such as Seland Neoprene, Dreisog, Delu Surfboards or Seriflor.

Sarah, we are so proud you are part of our One Air family, sending our warmest congratulations to all the team for your amazing work. You’re all amazing! 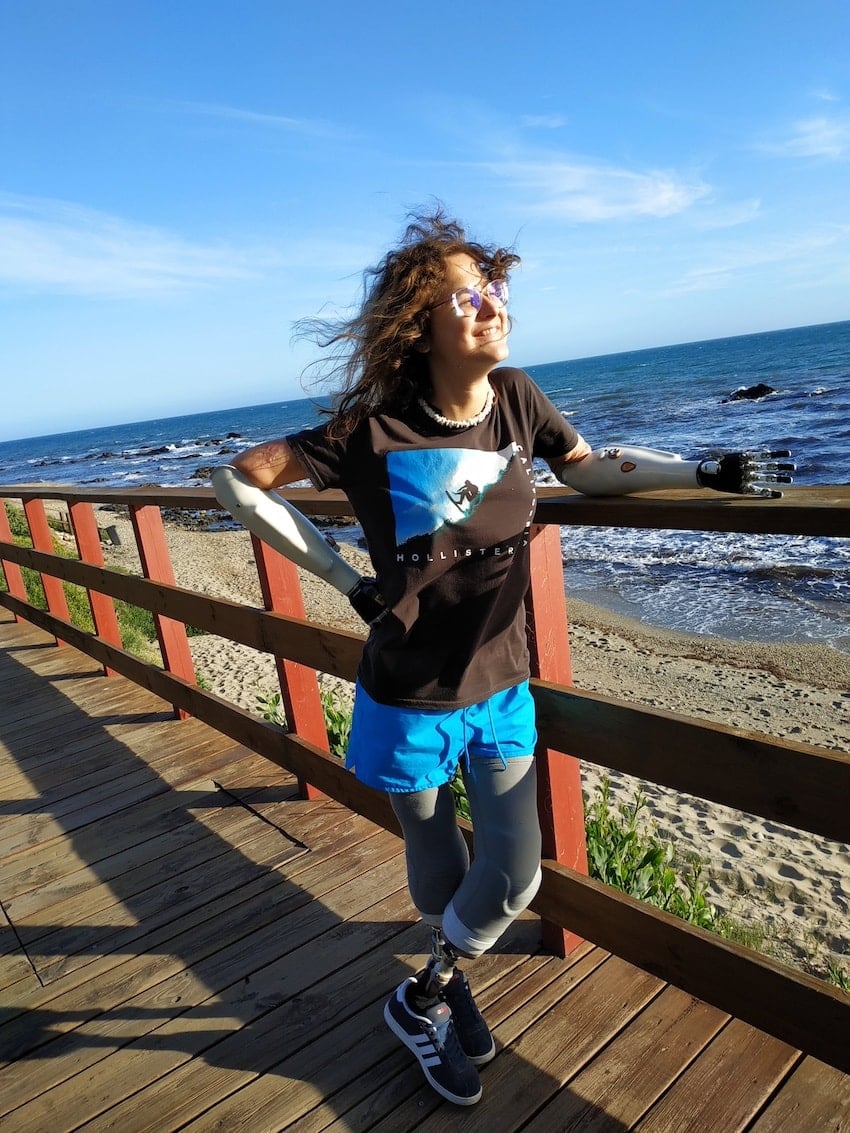 One Air with Sarah Almagro Vallejo!

At the age of 18, Sarah lost the limbs on both arms and legs due to sepsis resulting from meningococcal meningitis serotype Y. Since then, she has surpassed herself and proves everyday that she has no limits.

Currently, at the age of 21, Sarah is training with her instructors, Miguel Ángel Sampalo Bishop and Alberto De Mario, in adapted surfing.

We at One Air are extremely proud to be the main sponsor of Sarah Almagro Vallejo for the next years ahead, with the objective to qualify for the Paralympic Games in Paris 2024.

You only need to watch her on the board to see how far she’ll go and we’ll de there to see it! Everything is possible if you believe in it. We are with you, Sarah!