The seventh edition of the Torre del Mar International Air Festival has far exceeded all the high expectations we had. With record attendance, without a doubt, it has been the return that an event of such a category deserved.

A dizzying grid, teams from different countries, a lot of emotion, impossible figures and a lot of adrenaline in a day that left no one indifferent.

Do you want to relive the best moments? Don’t miss the video summary prepared by our colleagues from One Air Pictures and, of course, we are already looking forward to the next edition!

The Torre del Mar International Air Show 2022 is preparing its 7th edition, and from 9th to 11th of September an infinite number of aircraft will delight the public with their acrobatics and manoeuvres.

According to the festival organisers, on Saturday 10th the ‘Sunset Airshow’ will take place, a nocturnal aerial festival which will be the perfect opportunity to enjoy the displays using pyrotechnics.

Sunday the 11th is the official date of the festival; all types of aircraft will take to the skies over Torre del Mar, so enjoyment is guaranteed.

Undoubtedly, the Torre del Mar Air Show has earned a place in the great aeronautical events in Spain, because since its first edition in 2016, it has done nothing but grow.

The technical director of the air festival is Pablo González, although the organisation is also made up of the town council of Vélez-Málaga, the mayor’s office of Torre del Mar and ACAE, the Spanish aeronautical cultural association.

Of course, the One Air team will be there, filming the different planes and their aerobatics to bring you the best highlights video.

When in the Torre del Mar International Air Show

The festival is being held on the beach at Torre del Mar, and the display box is based on the Casa Miguel beach bar, which means that all the manoeuvres and crossings are planned to look perfect from that point.

The night-time Sunset Airshow will start at 19:15 on Saturday, and will feature the Pioneer Team, AeroSparx and a few other surprises.

But, officially, the Airshow will start at 11:30 on Sunday and will last until two o’clock in the afternoon.

It will be a record edition with 41 aircraft, surpassing previous editions, with nine military and institutional teams and eleven civilian ones.

The Jacob 52 Sports Association is a non-profit association whose aim is to promote aeronautical culture in our country. The sound of its aircraft, together with the skill of its pilots, make it one of the best civilian aerobatic patrols in our country.

It represents the avant-garde of European fighters, combining the most sophisticated technology with incredible flight performance. The roar of its turbines will undoubtedly fascinate you.

The Mar Menor aeroclub will be present at the Torre del Mar Air Festival, and despite the limited performance of their aircraft, pilots Hugo Lopez and Adolfo Baños, are capable of a dizzying display.

The display consists of basic flight manoeuvres taught in the instruction, carried out in a coordinated manner and always within the flight envelope allowed for this type of aircraft.

Both represent the elite of Spanish paragliding and are able to perform all kinds of acrobatics in the air. Undoubtedly, an exhibition rarely seen before and not to be missed.

We can safely say that this is the most popular civilian aerobatic patrol in the world. With their Grob 109b they perform aerobatics in formation while using pyrotechnics. Yes, you read that right; they combine fireworks and acrobatics in their nightly show.

We will also enjoy, for the first time in Spain, a demonstration of flying a jetsuit.

Coming all the way from Italy, they bring an international touch to the festival. With their four Pioneer 330, they will show us the class and know-how that characterises our Italian neighbours.

The best of the best, the show is guaranteed.

Made up of 5 EC120 Colibri helicopters, this is the only helicopter aerobatic patrol in the world.

With his ELA 10 gyroplane, he will show us what the machine can do.

Undoubtedly, one of the most awaited displays; in 2021, we were unable to see them as they were working on the Sierra Bermeja forest fire. In case you don’t know, the 43 Group is the Air Force unit dedicated to firefighting.

Coming from Switzerland, they are another of the highlights of the festival: nine planes in formation doing all kinds of manoeuvres and figures.

Aerial advertising company based in Malaga that will be present at the festival making the sky ‘the biggest advertising screen’ in the world.

We will see for the first time the Super King belonging to the Guardia Civil, as well as the Dauphin helicopter based in Malaga.

The National Police Force will be present at the festival with its modern EC135 belonging to the Air Medium Service.

They will impress the public with their colourful and precise movements. 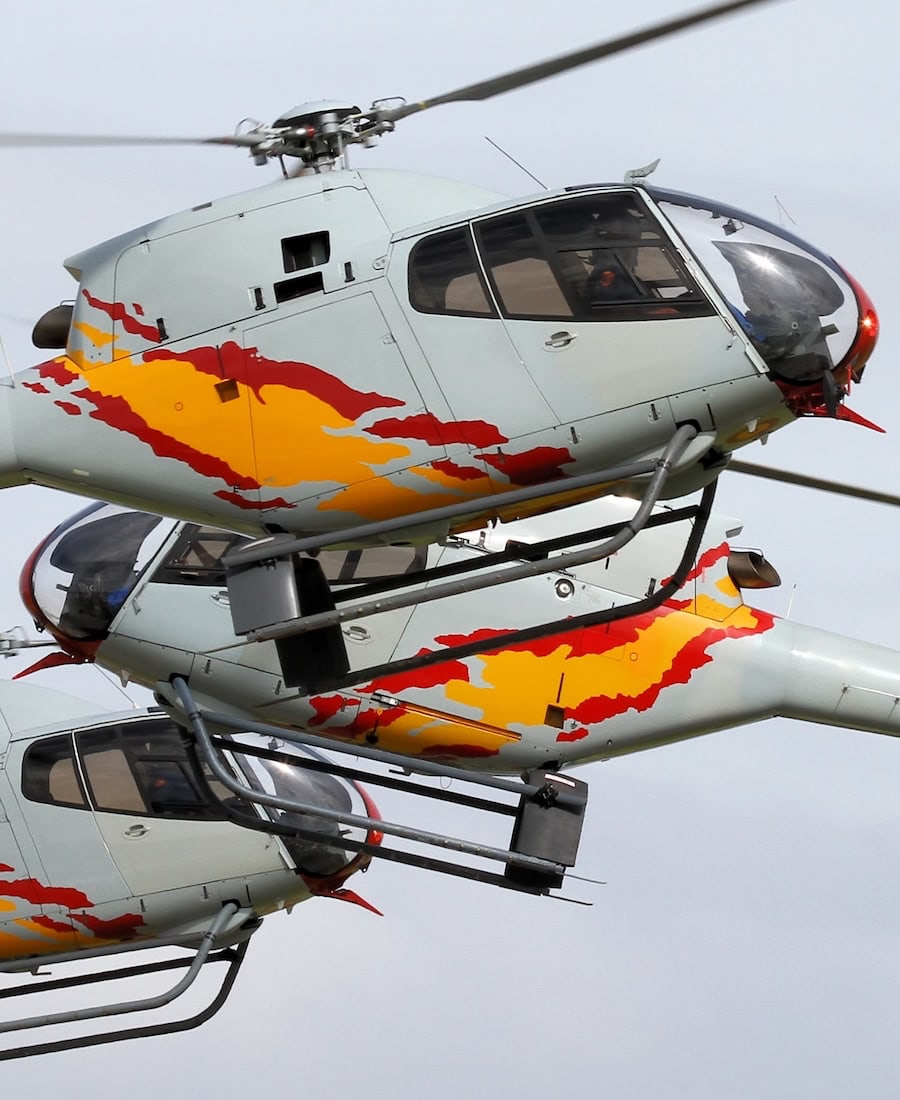 Tips to enjoy the air show to the full

Here are some recommendations so that all you have to worry about is enjoying yourself:

With all that we have told you, you already have a good account of everything that is going to happen this weekend, but we recommend that you keep an eye on the Facebook of the Torre del Mar International Air Festival, as that is where you will find the possible last minute changes.

In addition, they have recently opened their Instagram profile, where you will see the best photos of the exhibitions.

And, of course, you can’t miss our aviation blog because in the next few days we will update this post with stunning images and the best moments in video.